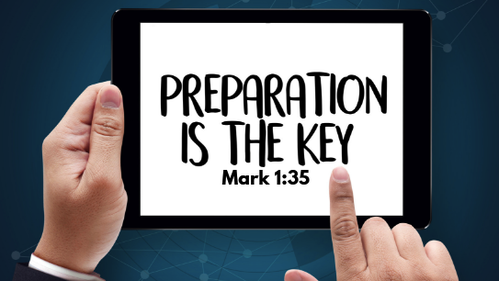 In the morning, while it was still very dark, he got up and went out to a deserted place, and there he prayed. Mark 1:35

As I reflect on this I realize that before anyone engages in combat, you have already determined whether you will win or lose at the moment combat begins. Winning and losing is not in the now, but it’s in the preparation for the now that is coming. Are you ready for the now that’s coming? The one who prepares best before the battle is the one that is prepared for the battle.

As we are in this Lenten Season, realize that this is a season of preparation. Also realize that as we push to complete this 40-day season, that each day becomes its own battle in itself. Every day that God blesses us with, our preparation must begin for that battle within that day.

Jesus becomes our model of preparation. Our text states Christ rose very early in the morning, while it was still dark and departed to a deserted place to pray. This is our blueprint for preparation. In His preparation of prayer, we see at least three things that will benefit us on our preparing for each day’s battle.

Prayer is a priority. Merriam Webster defines priority as something given or meriting attention before competing alternatives. Our prayer life must become and remain a priority in our daily lives. It should be the fist thing on our minds when God allows us to see another day. Prayer was vital to Jesus because this was his renewal and preparation time.

Prayer was prolonged. Everything in the text implies that this was not a short prayer. Jesus had early, prolonged times of prayer. Our preparation for battle requires more than five minute prayers. Our prayers should strive for God’s heart - to know God better so we can fulfill the will God has for our lives and for the Kingdom. We must pray until our encounter with God empowers us for the encounter we will face with the world on that day.

Prayer gives us power. Power is what we need for battle, but power will come through prayer when it is our daily priority and we spend prolonged times in prayer to God. This is when God gives power for the battle needed for the day. Remember Jesus in Gethsemane after prolonging in prayer had the power to face His betrayer. It was this power enabled Christ to die for the sins of humanity. Prayer prepared Christ for this battle. This is the power we need as we strive to build God’s Kingdom. God help us in our preparation!